We apologise for the short notice of the change of date of the BJWP open meeting which is now on 23rd February NOT 16th February.  We hope local residents will still attend on the new date.

The Blackheath Joint Working Party was set up to bring together Councillors, Officers and residents from both Greenwich and Lewisham to work together with regard to Blackheath.  The BJWP meets at least 4 times a year and advises on how best to use and care for the heath.  The Westcombe Society have representatives who attend both the main BJWP meetings and also work with the Blackheath Nature Conservation Group who report to the BJWP.

The BJWP are holding their 2016 public meeting at 7.30 pm on 23rd February at the Bakehouse (behind the Age Exchange) in Blackheath.  Anyone with an interest in the heath is welcome to attend.

Blackheath is both a Site of Metropolitan Interest for Nature Conservation and an open space used by many for both organised events and personal enjoyment.  A number of events have already been proposed for 2016 which include the usual such as the Marathon and Funfairs plus other events that have taken place in previous years such as OnBlackheath and new events proposed for 2016 such as ‘In the Night Garden Live’ (more information below).

Part of the agreement with OnBlackheath is that there is funding made available for small projects to improve the heath.  Updates on the 2015 projects will be presented at the BJWP public meeting.  The BJWP would like to hear from anyone who would like to propose a project this year.  Ideas should be submitted via the Westcombe Society Environment Committee (environment@westcombesociety.org) or by commenting on this post.

Circus Field 2016 – In the Night Garden Live, a Food Festival and Two Funfairs

Many residents will be aware that the Royal Borough of Greenwich recently asked for a licence that would allow an increase the number of events on Circus Field in perpetuity.  Residents groups and the BJWP objected strongly to this.  Greenwich have now withdrawn this application and have instead agreed to apply for licences on an Event by Event basis in future.

The proposals for Circus Field in 2016 are for ‘In the Night Garden Live’ and a weekend Food Festival.  These are in addition to the Easter and August Funfairs and the Marathon.  We don’t have any details about the Food Festival yet but the ‘In the Night Garden Live’ proposals have been presented to the BJWP.  Greenwich have turned down a number of other proposals including one to turn the Circus Field into a ‘summer beach’.

A new licence application just for ‘In the Night Garden Live’ for 2016 has just been submitted and residents should receive letters about it in the week commencing 25th January 2016.  The closing date for responses is 18th February 2016.  The following documents are available:

The general feeling so far seems to be that this sort of event is suitable for the heath but that the length of time on site is too long.  The Westcombe Society were very concerned about the proposed location of the car park (as in the plan included in the licence application) as this would mean that pedestrians wishing to walk across Circus Field would have to walk through a car park.  We therefore put forward an alternative proposal that, IF the licence is awarded, then the whole site should be moved further west to allow safe walking routes across Circus Field to remain open.  Our proposal was accepted in principle at a BJWP meeting last week and we are very pleased to see that the licence application includes conditions stating that the site will be moved west as agreed with the Blackheath Joint Working Party.   The proposed new location can be seen in the plan below. (We apologise for the incorrect information given in the earlier version of this post – conditions with regard to the new location of car parking had already been included in the licence application.)

We are also very pleased to see that a commitment is made in the licence application for the Royal Borough of Greenwich Event Team to work with Lewisham Council and the BJWP to formulate an Event Policy for the Circus Field.

Please let us have your views on the Licence application as soon as possible and please consider coming to the BJWP meeting where wider issues affecting Blackheath will be discussed.

Westcombe Society proposal for car parking and the temporary theater site which has now been accepted and incorporated as a condition within the licence application for ‘In the Night Garden Live’: 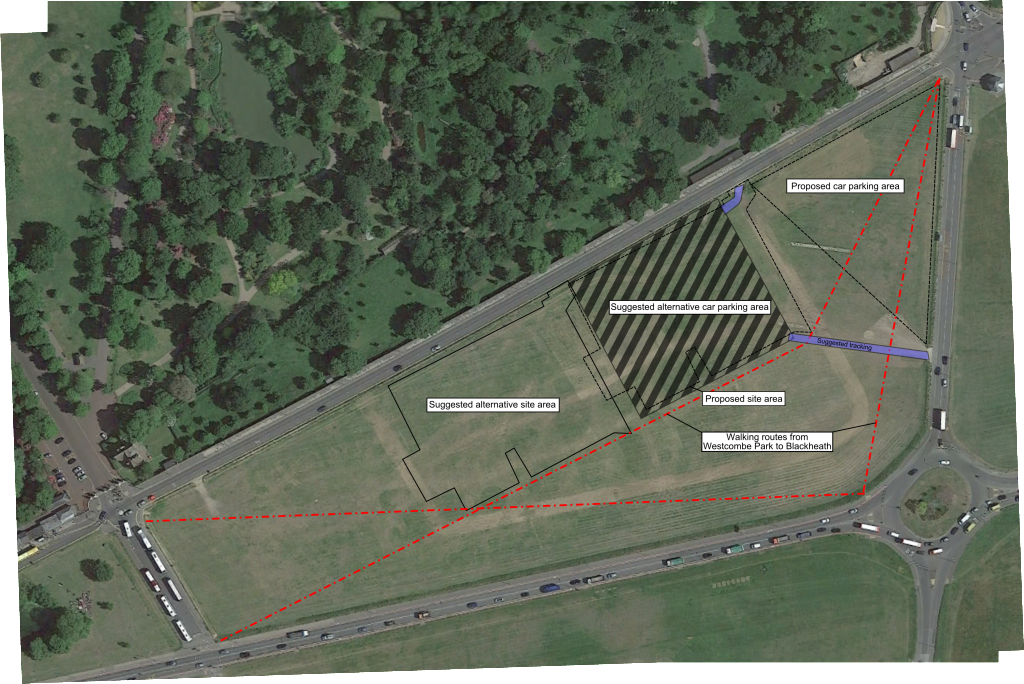 The application as we understand it is for ‘In the Night Garden Live’ which is a live stage adaptation of the children’s BBC television series ‘In the Night Garden’ performed in a purpose built inflatable theater.  It is aimed at preschool children and their families.  2016 will be the 7th annual tour.  More information can be found on their website

The proposals for Circus Field, Blackheath in 2016 are as follows:

The theatre will be open to the public 9am – 6.30pm on performance days with performances lasting approximately 1 hour at 10am, 12noon, 2pm and 4pm

No alcohol will be on sale

There is amplified music within the venue but there were no complaints at previous venues where the site was 70m from the nearest residential property in quiet residential locations.

Car Parking on Circus Field as per suggested alternative parking in the plan above.

The Westcombe Society is a fully independent amenity group which aims to forge links within the community to make this area a better place for all who live and work here.